Napoleon Bonaparte battled Napoleon Dynamite in Napoleon vs Napoleon and made a cameo in Nice Peter vs EpicLLOYD. He was portrayed by EpicLLOYD.

Information on the Rapper[]

Napoleon Bonaparte (August 15, 1769 – May 5, 1821), sometimes referred to as Napoleon I, was a French military and political leader during the latter stages of the French Revolution. He overthrew the French Directory in 1799 and established the French Consulate, which paved the path to make him emperor. As commander in chief of the French Army, he quickly conquered much of Germany and Italy, after which he created numerous puppet states. However, his success took a turn for the worse after he invaded Spain and Russia and was exiled to Elba in 1814. He miraculously returned in 1815 and started the Hundred Days campaign but was again exiled, this time to St. Helena, where he died.

Bonjour! Je suis Napoleon Bonaparte, emperor of France! I started problems with every major European power and they eventually declared war upon me. I was such a bastard to them they named the war after me, the Napoleonic Wars! In fact, people named a lot of things after me that made me look bad. The Napoleon Complex is when somebody feels inferior because they're short. But I wasn't even that short! 5'6" isn't that bad! People were always trying to take me down, Horatio Nelson busted up all but two of my boats, I got kicked out of Russia and got my ass handed to me in Waterloo by some European and Prussian dicks. Eventually people had enough of my bullshit and sent me to prison on Saint Helena island. Sounds great, right? No, it was terrible. Nasty and unhealthy and I eventually died there. My only regret is that I couldn't humiliate and take over just one more country. Oh well, next time!

How dare you address moi, you adolescent worm!

I am French! You are a buck tooth nerd with a perm.

I spit at you harder than Tina the Llama.

Smacking your face till your lips swell up like Lafawnduh's.

Doodle up some friends, you gangly freak show.

Before I toss you over the mountain like the dreams of Uncle Rico!

This bastard's about to see how bad a battle can be.

After this, your buddy Pedro will be voting for me!

I'm going to shove your moon boots straight up your poop shoot!

I'll whip you so bad, they'll make a virgin meringue.

You're the only type of dynamite that's never going to bang! 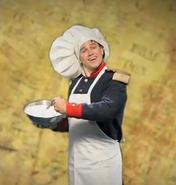 Napoleon in his cooking outfit.

Napoleon riding his horse.
Community content is available under CC-BY-SA unless otherwise noted.